In Japanese, broadly three scripts are used in a mixed way.

Hiragana and Kanji are used widely in a sentence. Katakana is mainly used for borrowerd words from foreign language.

In the above sentence all the three scripts are used as follows:

The Goal of this Session

Katakana alphabets are formed by taking a part of Kanji.

Katakana is also a set of 46 basic alphabets like Hiragana. All the rules are same as Hiragana.

You can download and print Katakana chart(PDF) for practice.

The meaning of each has been summarized below:

To memorize the  Hiragana letters, here is a video link that will help you to learn musically! It will also help you in developing your listening skills because songs can be useful in language learning as they provide a format for memorizing vocabulary and rhythm of the language.

So, we suggest you to become a kid again and use your creativity to widen your language learning potential. 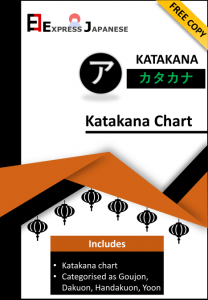 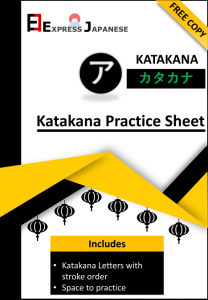 Japan in Japanese is Nihon or Nippon.

For more practice, we recommend the books below. Click on any book to get a detailed review. Also check out some popular dictionaries and Flip cards that can boost your study method.

Practice reading and writing Katakana alphabets as many times as you can until you become Perfect. And then you are ready to shift to JLPTN5 and learning Kanjis.